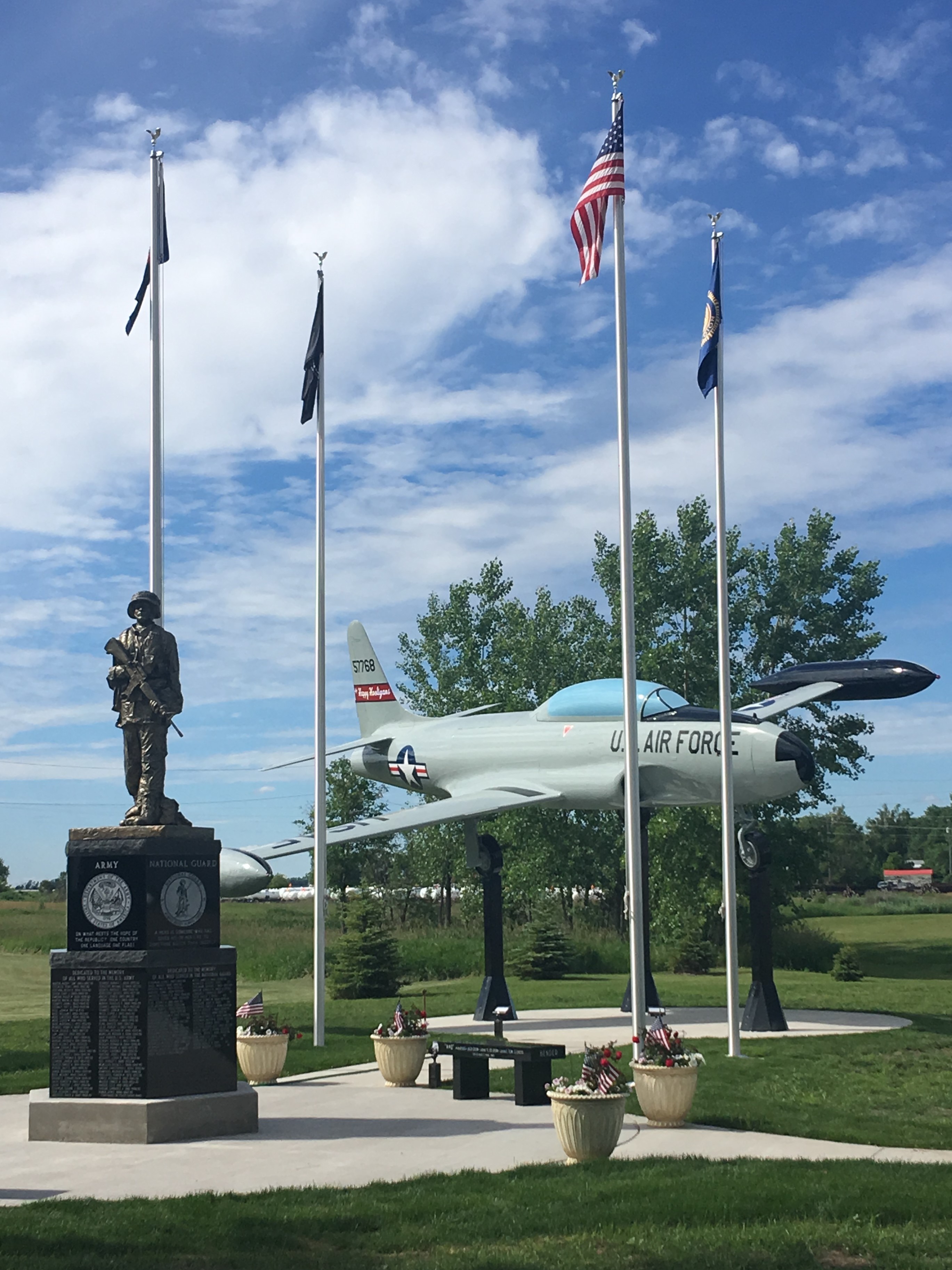 The History of the Wimbledon Veteran’s Memorial
It takes a community effort to make a dream come to life. For several years the Wimbledon Community had been discussing the need for a memorial that would honor local veterans from all branches of the armed services. The project was starting to take shape in the minds of Jim and Jan Martin.
The first step was to form a committee of dedicated volunteers. The committee was comprised of Jim and Jan Martin, Jessie Albrecht, Angy Bartlett, and Chad Bakken.
Early in 2014, the Steak Night organizers, Jim and Jan Martin, Marvin Martin and Ron Hoggarth decided to donate all the profits from the bi-weekly steak nights to this Veteran’s Memorial Project. This was the beginning of various funding resources that would be required to support this dream.
The first order of business for the committee was to look for a location from the available lots in Wimbledon. The first lots they considered were too small. As the word spread that this project was going to take flight, Agroline/VanRay donated the perfect plot of land to the city in the Spring of 2016. At the same time, Arrowwood Prairie Co-op was building and moving to their new location so they were able to donate fill dirt for the project. Dan Gilbertson donated the truck to move the dirt. Les Pratt donated gravel for parking along the driveway. Additional gravel was provided by the Memorial fund.
During all this time, Paul and Kelly Goehner of Jamestown Monument along with Jim and Jan Martin began designing the cement layout and the memorial. Paul drew out the plans for the cement work that would showcase the monument and the military aircraft. It was important to Jim and Jan Martin that we represent all five branches of the Armed Forces and the Army National Guard.
The first design was a solid monument, but it was quickly discovered that would be too heavy. It was then decided that we would build a hexagon out of granite panels that would leave a space for a time capsule inside. This would work out perfectly, a panel for each branch of the service and one for the Army National Guard. Names of all military service members could be displayed appropriately.
In June 2016, the wind farm near Courtenay, ND was being erected. Jay Morrell, wind farm concrete contractor, agreed to donate and pour the cement. Since he would be finishing the concrete project in Courtenay in July of 2016, the concrete forms needed to be built quickly. Mick Bredeson Construction was contracted immediately to build the forms and make sure they were in place and ready for the cement.
Top soil was needed to smooth out the area around the concrete. Rick Brueske was willing to donate the dirt with Rick Wenzel providing the truck to haul the dirt. Soon after, Wanzek construction donated and planted nine evergreen trees. Dwight McMillian donated four more trees that were required to complete the project. Willie Stoltman donated his time and equipment to move in and plant the additional four trees.
2
During all of this time Jan Martin and Jessie Albrecht spent countless hours composing and sending letters requesting donations for money from Wimbledon and Courtenay Alumni, the American Legion Post #236 members, and several other organizations. Several “Grants” were applied for as well. Family and friends donated $100 each to inscribe a veteran’s name onto the granite panels. Names came in from all over the United States.
Because the granite for the memorial panels was ordered from China, it took six months for the finished granite panels to be delivered. If the project didn’t feel real before, it sure did then. This was a large expense from the donated and “Grant” funds.
In October 2016, the committee continued to research options for the statue that would be mounted on the top of the Veteran’s Memorial. The committee’s first thought was a Bald Eagle, but they quickly changed their decision to a soldier. First, a bronze combat soldier was chosen, but the committee soon discovered the $30,000 price tag was too costly. Metal art was discussed next, but that carried a hefty price tag also. After talking to members of the community, it was decided a combat soldier would be perfect! Jamestown Monument found a concrete soldier in Kellogg, Minnesota that was affordable. A weekend trip by Jim and Jan Martin along with Rick and Kay Albrecht secured the soldier to its new home.
There was always the idea to have a military aircraft at the memorial. Chad and Leslie Martin, aviation instructors at the University of North Dakota, Grand Forks (UND) were asked by the committee to help find such an aircraft. After talking with a fellow instructor at UND, the stars aligned once again. He knew of someone who had a military aircraft in Fargo. After many months of paperwork and negotiating, our dream to find this military aircraft was fulfilled. On February 1, 2017 the United States Air Force T-33 Aircraft (Trainer) was promised for our Veterans Memorial. The aircraft was moved to its new home here in Wimbledon in early June 2017
After many months of volunteered time and a lot of hard work and sweat by many people the memorial plans began to take shape in May 2017. The flagpoles were erected, the memorial was built, and the soldier was put in place on the top of the monument on May 19 and 20, 2017.
To complete the landscaping part of the project, Mary Beth Olombel donated extra sod from her home which was placed on May 22, 2017.
It took many volunteer hours and several monetary donations to make a project like this happen in a small town community. Thank you to everyone who was involved in this Wimbledon Community project. 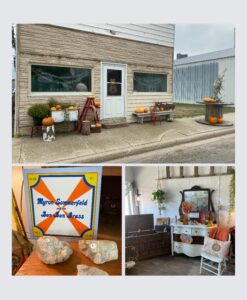 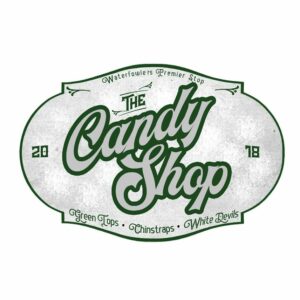 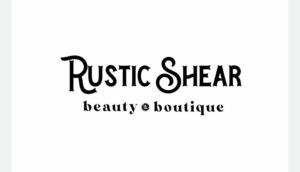 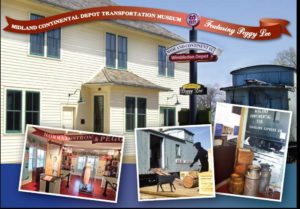 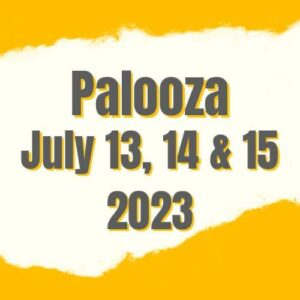 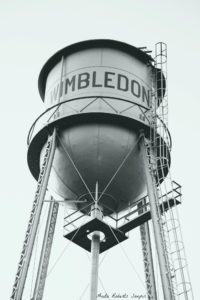 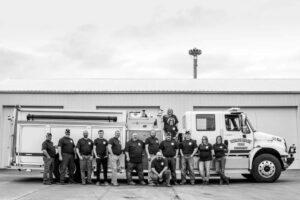 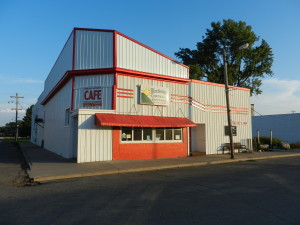 Thanks for your event submission. It will be reviewed soon.